Review: Sisters of Your Sunshine Vapor

That the epic, atmospheric middle-piece to this album is called “Spaceman Blues” is strongly indicative of it's sustained vibe...

This is the second full length release from Detroit/Ypsi trio formerly known as Sik-Sik Nation, but the debut (and, aptly self-titled) for their new incarnation, Sisters of Your Sunshine Vapor. After a handful of shows with fellow psychedelic bands from New York and Cleveland, (as well as still drawing from influences such as the Black Angels and Warlocks), the trio: singer/guitarist Sean Morrow, bassist Eric Oppitz and drummer Rick Sawoscinski seemed to have reached, as a band, an evolved sense of themselves – and this album is the recorded effort to hone that vision – self-produced in their own recently-established studio in Ypsilanti.
The guitars soar and scream, leaving gurgled effervescent echoes across the starry sky (“Doom”) the bass finds a groove, striking and angular, strutting and stomping (“Slow Suicide”) and the drums get tightened and punchier, trouncing along with ominous marches (“Lord Is My Gun”) into freewheeling, shakeable territory (“Victims of Momentum”).
I find myself unable to avoid harping on that evocative title, “Spaceman Blues”...This album is so dizzying with its howling guitars—and howling vocals (“Momentum”), and it captures that stretched and blown apart haunted aura of banshee tones and head-swimming echoes (“Lord is my Gun”) like some brooding broad shouldered ghost might check you through a plate-glass window. In essence, it covers that druggy, strung out vibe of space rock – but it is constantly pushed and spun by the inescapable groove, locked in by the bass and drums – following a much more R&B and brooding scorched blues take, than their previous material.
Towards the middle of the album, “All Your Lover” picks its way in on a honky tonk guitar only to be quickly fucked with, looped and played in reverse before cascading down upon the driving beat. It seems there’s hardly any corner or texture of this album that hasn’t been twinged or tweaked or hazed or fuzzed, buzzed, blown or tightened. 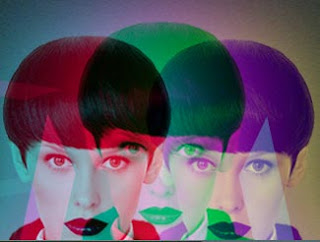 All these austere vocal incantations, disorienting guitar roars, and wanderlust-inducing rhythms that relentlessly drive and push – makes it feel post-apocalyptic, but in a more cerebral, dream-like manner, something similar to the way A Place To Bury Strangers debut felt – Not so much foreboding, but cathartic, not repellently ominous, but, something close to ethereal - inter-dimensional in that space rock way – yet spackled by the dirt and grime of the physical plain – thus the humanism of blues and the wild way of traditional rock n roll. In terms of a psychedelic rock record – this will sound like a band that’s done it’s homework – for the love of loud, bellowing, pedal-pushed guitars, it’s marvelous in the psychedelic ideal.
Release Show - 10 / 17 - Majestic Cafe
Sisters of Your Sunshine Vapor
Friends of Dennis Wilson
The Wicked Hemlocks
Karalavara
Posted by jeff milo at 2:13 AM