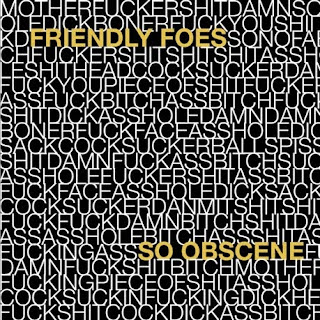 
For the Friendly Foes, this 7”/EP hybrid is, for all intents and purposes, a follow-up. In this age of growing pains away from the traditional album to album to album output of bands, singles, 7”’s and EPs will become commonplace – whether it’s fair to measure this against the whole of their 2008 debut Born Radical is another debate entirely.

As a follow up (of sorts), The Friendly Foes are continuing their dedication to energetic pop – the tempos are still hurried, the guitars furling up and all over, the bass swooning and locking in nicely with those perfectly head-bangable drums – but the overall mood is grittier. Singer/guitarist Ryan Allen led most of the way on Radical but on So Obscene, bassist/singer Liz Wittman leads on three of the five entries. With Allen’s voice already high and hazy, Wittman’s sprightly tone only added to the vocal contribution for the power-pop-soaked debut being bit of a rousing sugar high over all those crazy sashaying guitars. From the first 30 seconds into “How It Works,” the guitars gurgle in and start riding along on this grimacing, cutting tear under drums pounding so much heavier than past Foes fare that it almost sounds metal by comparison. That relentless clanging pound keeps this track going, already distinguishing itself by its more punk-ish minimalist aerodynamics, just this destructive march that gives way to a brief guitar solo dancing over bass roars.

This gruffer, swaggering stance continues on that fiery bass that opens “Keep Breathing” as Wittman leads on vocals with a rougher bending tone for her often cute and coy voice, and when it hits that second chorus you feel she might throw something at you by song’s end, if not an empty pint glass, than her own fist. This band was born with an unabashed embrace of pop, specifically 90’s indie/college-rock in nature, which is where the rounding anthemic chorus of “Line Up” fits in - with guitars diped back into the sunnier tones of Radical and drums that set rhythms for the hips instead of just the bobbing head. With “Keep Breathing”'s vigor and “Line Up’s” infectious hooks, the reward of Obscene seems to be the highlight of Wittman’s writing and “A Million Scenes” is the conclusion to her trilogy (of the 5 Foes songs here), a somber acoustic ballad with Allen hovering in the background of the chorus, easily the softest and most heartening tune yet in the Foes catalog.