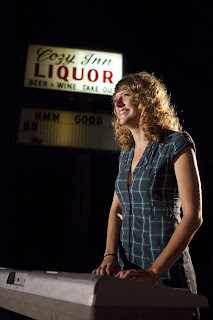 (Trever Long's shots, during the production of their music video for "Good Time" - directed by Katie Barkel - see it tonight at the Blind Pig in Ann Arbor - with Lightning Love, James & The Rainbros and the Satin Peaches)

Interview - Lightning Love - Part 1
~
“There’s a part where somebody breaks a bottle over somebody else’s head.”

Lightning Love singer/pianist Leah Diehl says she doesn’t want to ruin most of what happens in the Ypsilanti trio’s forthcoming music video premier.

“They said those fake bottles were made of sugar,” guitarist Ben Collins distracts, “So I ate some of one…” Drummer Aaron Diehl grimaces to which Ben nods. “It definitely didn’t taste like sugar.”

The trio, now coming on two years together, with one LP (November Birthday) released and future recording not far off, recently wrapped a music video with director Katie Barkel for the song “Good Time”; a wavy, up and down, hook-filled synth jam about embracing the forgivable depravity of certain points in ones youth.

“Our band sometimes sounds…cute,” said Leah, “so, (Barkel) didn’t want to make the video too cute or else it’d just be cute overload.” Barkel (with cinematographer Mike Berlucchi) recently debuted her work directing the Silent Years video “Taking Drugs at the Amusement Park.” 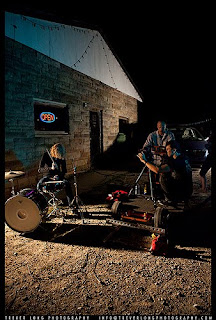 Aaron, slouched a bit across the table gives a charming smirk, “You have to experience it, to really get the songs.” He nods to the bar behind us, “I don’t do it ‘cuz I like to, I do it for the band.”

Leah says that darker narratives can provide balance against the saccharine sound. “I can’t help it – my voice is high and I play the keyboard so of course it’s always gonna sound cute.”

Yeah, I say, I didn’t want to use the word first and then I ask if it was Barkel who brought it up when the video was being planned. “Which word? Cute? I think I may have said it first actually,” Leah admits.


“That’s what it is,” Ben shrugs, “If you look at it at surface level – you really have to listen to the lyrical content to go further into what’s being addressed. So that’s what the video is.” (The video will hopefully premier during their October 9 Blind Pig concert). 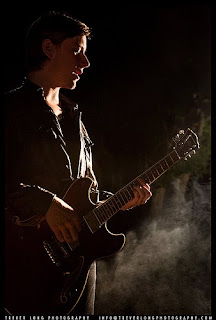 “Besides, we aren’t really cute—as people,” Aaron cuts in, “so, yeah, it doesn’t really fit.”

Then Ben says, “There are a lot of bad things that happen when we all hang out together..."