The regal, dark, messed-up-love songs of The Hounds Below - DC Interview
~ 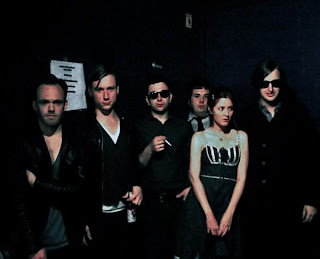 Jason Stollsteimer never had a gang.

So when drummer Brandon Macdonald offers the euphemism in describing his devotion to the singer/guitarist and leader of Detroit born punky-bluesy-rock quartet The Von Bondies in regards to their current project, The Hounds Below, Stollsteimer jumps on it with a subtle grin.

The Von Bondies were never a band the same way the Hounds Below are a band, to certain extents.
With a 7” (recorded with Jim Diamond) out this month, The Hounds Below features a wide arc of area musicians: Macdonald (of Qualia/Friends of Dennis Wilson), bassist Molly Jean Schoen (of The Decks), keyboardist Jeremy Freer (of The Juliets), guitarist Sean Lynch (of 800-Beloved) and guitarist Ben Collins (of Lightning Love).
With the VBs on temporary-touring-hiatus, Stollsteimer decided to jumpstart the project once known as Jason & The Hounds Below, which saw a one-off performance back in 07 featuring friends like MacDonald, Drew Bardo (of The Questions), Jeff Fournier (of Heroes & Villains), and Leann Banks (of Von Bondies) interpreting songs Stollsteimer wrote in the midst of his divorce in 2006 that wouldn’t fit with the Von Bondies.
“(The songs) weren’t sappy, but they were more ballad/heartfelt songs, where the energy of the band shouldn’t be the focal point of selling the song," said Stollsteimer, "the song should sell itself.” After this new line up’s second performance, opening for the Hard Lessons at the Blind Pig, curious college kids flanked them with compliments, asking, “What do you call that kind of singing?” Stollsteimer picked from the top of his head and referenced Roy Orbison’s signature syrupy/bluesy/doowop croon. “Roy who?” one attendant followed.
“There’s not a lot of bands that play like that, old fashioned,” Macdonald said.

Stollsteimer follows, shrugging, “I try to make them beautiful, I guess. I wanted a dark sound that could be looked at as beautiful.”
The newer Hounds songs, following a classy-and-classic pop style that bridges syrupy crooners to shoegaze alt-rock, required more intricate instrumentation, organs, guitars, bass, drums, that Stollsteimer realized, unlike with VBs, he wouldn’t be able to pull off on his own.

But this has become a unique line up; most joined the septet only knowing one (or two) other members; they’re all single (so no exterior Yoko drama) and they come from different areas, psychedelic, shoegaze, baroque pop, indie-rock – now, together, interpreting an altogether fresh (if still revivalist or “retro”) style in presenting a swathe of moodier R&B, smoky soul, stately 50’s pop, but still maintaining that dreamy atmospheric fuzz rock sheen – (not unlike The Raveonettes’ unique style of throwback pop, with whom the Hounds share a bill, 10/23 at the Magic Stick).
“There’s no egos,” said Macdonald. That's heartening for a band full of respective band leaders (Lynch, Macdonald, Freer and Stollsteimer). On top of that, the Hounds, so far, is not only drama free, but conflict free – considering the family tree of other band connections.

“I don’t see it as an identity crisis,” said Schoen, who also has a solo songwriting project and recently played with the Vamps. She said musicians simultaneously playing in numerous bands is simply symptomatic to Detroit.

Brandon added, “Our other things will pick up in a minute, it’s not like they have to stop so we can do (Hounds).” Indeed, The Decks performed through October and Schoen continues to write on her own (recently contributing to the Bellyache Records Sweet Sounds of Detroit Vol 2), while Lightning Love and the Juliets are both finishing recordings.
Live, there seem to be a trio of bonds – Freer and Lynch sit to one side, “smoking like chimneys” (thus, said Stollsteimer, being dubbed, ‘The Smoking Section’) while Schoen and Macdonald, having just met for this band, have bonded over their discreet and distinctive rhythm contributions, leaving the young but talented Collins with his intricate spindly style to add subtle but flavorful dressings to Stollsteimers dominant, charmed vocals.

Macdonald aptly described their gang-like dedication to music: “I’ve always thought that playing the song is the most important thing, not your part in the song.” Schoen and Stollsteimer agreed that there is a mutual respect that resonates to and from each member.
“I wanted to present (Hounds) as a regal kind of band,” Stollsteimer said, seeming to show a bit of wear wrought by years of crazy screaming amp-jumping days of Von Bondies’ high energy live shows. Another goal was efficiency and expediency.

As Schoen said, “I just like how quickly everything moves (with Hounds).” After one month together, the band played their first two shows, at the Magic Stick (for the Black Hollies) and The Blind Pig (for the Hard Lessons). In mid-September, they recorded a 7” (available at the upcoming show, 10/23) and in December they’ll do a small tour, with another 7” in the winter and a full length next year. Stollsteimer said he has never burned bridges from his years of touring, which helps on the national scale, but even on the local level – the current line-up, Schoen said, has “paid our dues.
Their excitement is palpable, not only for the newness of the project, for the collaboration and for their emphasis on a more elegant style, but for the road ahead. And, “no one can judge us yet,” Stollsteimer said.
“Oh, they’ll judge us,” Schoen shook her head.

“But,” Stollsteimer answered, “there’s no preconceived ideas. Like, with Von Bondies everybody expects like, sloppy blues or pop-whatever. In (Hounds), I just try to write, kind of-messed up love songs, which are normally not at all about love.”
"I’ve always looked up to people like Otis Redding or Sam Cooke," Stollsteimer continues, "but I would never attempt it in the Von Bondies. But now, with the Hounds Below, musician-wise especially, I have a band that might be able to pull off some of it.”
With the talented handful of musicians, all songwriters and passionate players themselves, Stollsteimer said, that, now, “I don’t have to jump off an amp to win over an audience.”

10 / 23 - Magic Stick with The Raveonettes and the Black Angels
Hounds Below
Posted by jeff milo at 3:09 AM