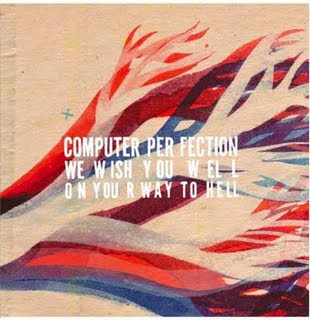 
“All through space and time, we’ll go, you and I, pushing past familiar names and faces we’ll forget.”

I spent an entire road trip with this record, driving through tunnels of yellow trees. I kept telling myself I wouldn’t open this up harping on the same old things about Computer Perfection – such as the echoed press-release-esque recital that the formative trio, Gene Corduroy, Bem and Nathaniel Burgundy IV, forged this band out of the ashes of their recent tenure in pop-powerhouse Pas/Cal – or that, cringed and clichéd as it may be, this is a record for them to find themselves, to find their own sound.

My windshield, mirrors and windows swathed by the papery flippers of oranges and reds, the pavement rolling by like LTD’s girded, motorik rhythms, under shimmying synths warming and fuzzing the palette for those angelic harmonies – the imagery facilitated my revelation that it should, or could, be the lyrics that I unpack. “We pressed in closer listening to the distant ringing cathedral bells,” sung in “Able Archer” under chiming synthesizers that set a very heralding, church-bell-esque glow) “…the trees have lost their leaves for good and the skies become a carousel.” Sigh.
My knee-jerk caution would be that I could say so much about the music – clicking, gurgling synth dressings, ornamental upon the emotive sweeps of electrified strings and jaunty bass grooves; rich piano tones taking turns with guitars that never settle between the banks of surf and space and silky vocals as smooth and comforting as your ageless blue cotton hoodie. And harmonies?…well, I mean, cripes…perfection is part of the band’s name…but I digress.

Computer Perfection will take you on a journey from krautrock (think a much sprightlier Kraftwerk via Man Machines on “Strange Echo Part 2” – or the staggering Neu-like marathon of “Sweetie Pie”) to club-ready synth pop (think those cherubic-feeling synth-n-bass affairs of New Order on “Blue Blood” with echoey drums and choir-like vocals), to naïve and freewheeling indie-pop (take those wispy tones and UFO-sounding whirls with bob-n-weave drum and bass on “How I Won the War” and you’re thinking haughty-arty-pop like Stereolab, until that beautiful cutting surf guitar swerves and takes the lead).

“What if you came along with me?” they sing on “Sans Soleil” only to add in its b-section “follow me…” Not that I want to go back to that cliché about finding-their-own-sound, but it becomes as much a journey for us, particularly coax by their lyrics, as it is for the band, forging a path, musically.

As the trio noted in a recent interview, and to me in person, that Corduroy and Bem’s pre-school age daughter is essentially in the band and contributed to each song somehow – then I can’t resist indulging that this is a very storybook-ish affair – not far from magical, imaginative, bed-time-stories, (where we’re sinking into dreams and dancing on pale white moons) – even the cynical-sounding album title sounds like a nursery rhyme. Perhaps some of it is allegorical (another incantation that “this is not the end…we can start again,”) and perhaps, for the sake of the bright-eyed kid in all of us, some is merely escapist fancy-free, (to sing along with, hand-in-hand on a grain of sand, upon a fantastical island just as the seasons turn). Damn I’m glad this came out in autumn, and that I’m in a car with all these leaves falling– and the sky becoming a carousel… Sigh.

Computer Perfection on Myspace
more at
their site