Ah, the youth of today are aligning! I mean, I don't want to turn this into a wayward rant on ageism - but through the mid-00's it seemed Detroit's crop of bands were dominated by a bunch that were all hovering on the right and wrong side of 30. When a formidable line up comes together where each player still hasn't (if barely) reached a quarter of a century, it leads one to start getting zealous romanticizing of "the future" generation.

Oh please, I told myself I wouldn't get into that when I started writing this post...

Either way - the vanguard of SE-Mich indie rock will parade across the stage, each as effervescent in their rough, surf-toned shakeability as the next -

After a somewhat quiet '09, east side quartet The Decks are revving back up - with a spat of shows scheduled and "a ton of new songs" ready to be recorded.

Next week, surfy/shakey popsters are now at the center of a line up that includes The Divine Comedians (theatric indie/folk spearheaded by former Dollfaces Nick DuFour - and backed up by two Decks--Alex Glendening and Maria Nuccilli and a Sight--Gordon Smith), and two college-town groups - Secret Twins (from Ann Arbor) and Piss Disco (from Lansing).

Heart! Each band brings an energy, but also a tight, rhythmic style - it's a nice balance of sweet sunny pop with raucous rock - most of all, just a lot of heart! It's damned endearing - and you should come get a sample - this will be a showcase of the new sensibilities of weird crazy pop coming from the west and mid-Michigan (Secret Twins / Piss Disco) and shimmying indie rock from around Detroit that we've seen develop over the last three years (Divine Comedians / Decks). 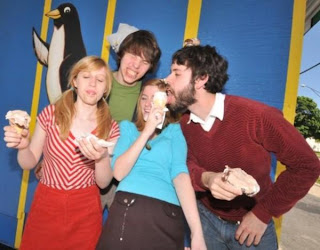 Oh-you-Secret Twins
Posted by jeff milo at 8:11 AM