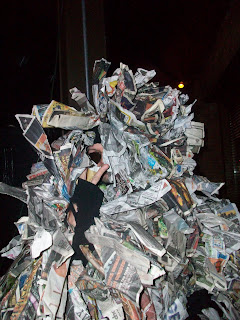 It is Wednesday night and I’m sated with lentils, coughing on incense, gnawing on peppermint sugar blobs and being distracted every other three-words-typed by the television left-on six feet away from me. Comedy Central. There’s barely a hint of killjoy chill outside. It’s that perfidious ruse meticulously set by Old Man Winter – its surreal to have a warm-ish Blowout experience: as most of us suburban-set metros have gotten so use to wobbling our way over icy sidewalks, faces screwed up, chins down battling blusters with our trendy, yet cumbersome winter coats left behind on passenger seats of cars far down the block where Evaline meets Alpena, by the freakin’ railroad tracks.

I know it’s tradition and I know that we always flip the social coin between the been-there-done-that’s and the this-is-going-to-be-greats… one mind-set ends up looking like a very well-dressed, perfumed/cologned parent rolling their eyes and huffing at the kids running around screaming while the other mindset is probably close to the front of the stage, with their schedule and maps in their back-pockets, ready to jump to the next lily-pad.

Well, more likely, 90% of us will be both, ping-ponging between the two at dizzying speed and whimsicality. At the end of the day, or the end of the 4 days, this is our thing, man.

It’s our late-winter-set Halloween. We go around to all these different houses, dressed to the 8’s in thrift gear and shout and jump in enthusiasm, either at seeing our friends at the bar or seeing our friends on the stage. And there’s never time to stand still – one must always be ready to scurry down the street, bumping into and off-of other costumed revelers coming and going, to the house you just pillaged, perhaps.

Of course by house—I mean bar…only for depressed, considerably un/under-employed SE-Michiganders could I use Halloween candy and childlike revelry as a metaphor for alcohol and loud music. 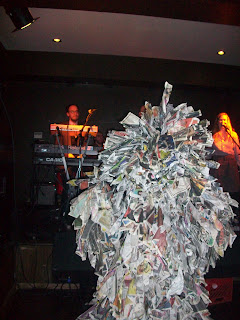 ...My cat, Matilda, an all-black American shorthair, has just jumped onto my lap and is traipsing over the mousepad… …and I half-consider indulging the adorable irony… either way, enough said – Here we are – let’s head out for the first night of the 13th MT-Blowout – legitimately the largest all-local gathering of bands in one hectic area – we’ll see what happens…

I navigated the gathering waves of smoke puffing bodies into the Majestic Café to see the last song of Mirror Twin, a new indie-pop group that I’ve yet to find an info-providing myspace site for, but can at least name drop Loretta Lucas (of The Sisters Lucas) singing lead vocals – I liked what I heard, very snappy. 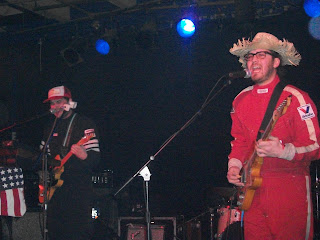 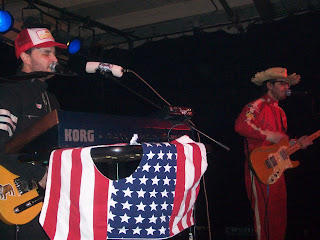 Next it was upstairs to be swooned by the harmonies of Josh and Daniel from Dale Earnhardt Jr Jr – and their still quite-pleasing rendition of “God Only Knows…” – and that’s an admirably bold statement specifically for a pop group – to tackle what might be one of the best regarded “pop” songs by one of the best regarded “pop”-song-composers of the 20th century. “Simple Girl”’s dreamy-ness is holding up – but listening to them makes me long for summer sunsets – with their preternatural vocal-chemistry and drum machine – it seems clear this is the fuzzy/sunny/poppy cousin to Silverghost’s more new-wave art/punk thing. 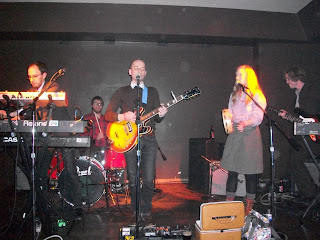 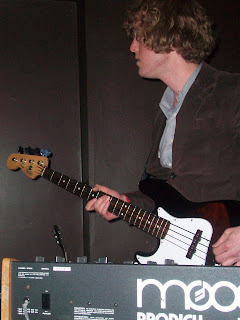 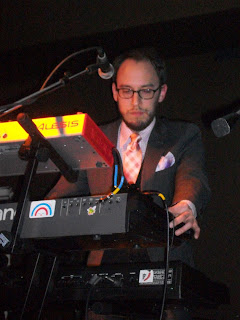 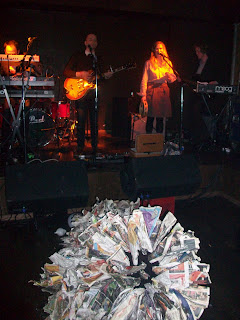 Next was Computer Perfection – who had one of their strongest sets – soundwise and performance-wise – opening with two new songs from what will likely be on the follow up to last year’s We Wish You Well on Your Way to Hell – Aaron’s drumming was impeccable; the harmonies were great and Steve got to play some moog!... Oh, and…they had a newspaper monster (who looked like he stole some dance moves from Dan DeMaggio) performing in front of the stage… 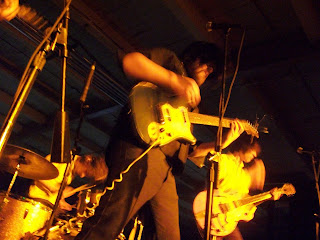 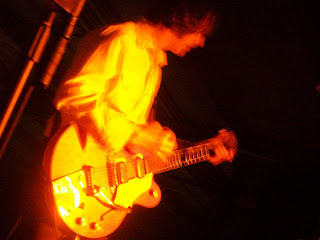 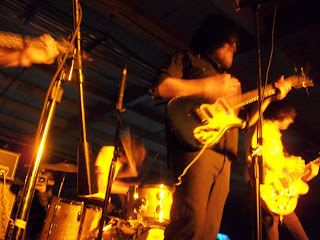 I ran upstairs in time to get four or five songs from what I thought was the strongest set of the night from a new personal favorite – The Sugarcoats – well-done-twang-ified-bayou-bludgeoned/indie-punk-rock – fittingly (and awesomely) covering “Electricity” by Captain Beefheart.

Day jobs would call us away before we could The Displays or F’ke Blood – but that’s a review I’m sure the JCM boys will probably cover.

Where I’ll be tonight… Paychecks, mostly… but, (at the Whiskey in the Jar)--I’d like to see just what the hell Jesus Chainsaw has planned… head over to the Free Press and you can see them, along with many other DC favs, listed as legitimate Blowout-bets based on “comedic” power of their band name.
~
photos: mike milo