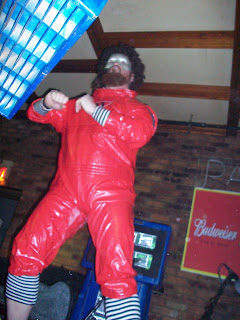 So, how's your Blowout?
This is what mine's looking like... 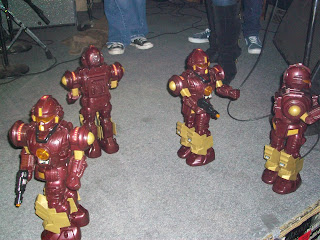 The little hipster devil that resides in the back lounge of my skull - around this time of year, enjoys hopping off of his la-z-boy recliner and shuffle his skinny-legged-self over crushed piles of ironic empty PBRs to start pulling on other synapes in my brain and deceive me into thinking that it is physically possible to see every band I want to see at Blowout Time - to delude me into thinking its some sort of requirement - a competition - a clipboard-checking scavenger hunt - ... 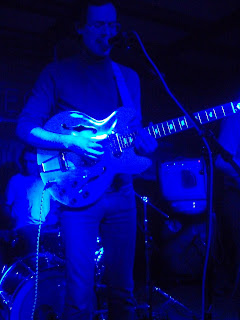 G'damn it... One must shrug it off at some point... (Head over to Eat This City's recap to read scrawls from a team that took in 12 different bands (however many songs it actually calculated to is another story).

But Blowout is a glorious and grinning trap - You might not want to walk away from one set yet, because to stay for one band's entire alloted slot could prove to be one of the most fulfilling performances you could find. Sometimes you get bit when you try the whole: Hey, I've never heard of these guys before, why not try them? And then again, sometimes you're rewarded.
Other times, you just lose outright. Case in point, my missing Mister at Paychecks last night - an engaging MC, able to balance charm and bite - whose CD (You Can Call Me Mister) highlights a well-versed sensibility in wax-diving sample-utilization culling from jazz, soul, gospel and r&B for a nice delivery of smooth grooves, a fine, fluent, freeverse flow - spoken-narrative at points, bouyant and head-spinning sprawls at others...never bombastic and often pepped with considerably pop-single-ready choruses.
When I walked in - each successive band following his opening 8:20 slot raved about him - likewise throughout the crowd. And I was off, somewhere else, chasing some other potential Blowout epiphany... ah well. While I can't speak for the performance, I can show you this:

So - to briefly recap: 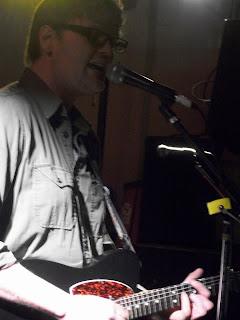 Started with Matt Jones - gothic folkster from Ann Arbor, playing a solo, plugged-in set under some awkward lighting. Balancing a bit of the intricate, bristlying haunts from his debut, Black Path but dominatnig with new material of a sometime-in-2010-new-record... 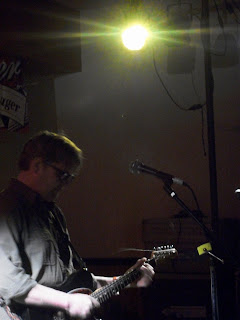 Then cruised over to the New Dodge for a few minutes to take in the loud might of blues-grooved psyche group Blue Black Hours.
During which time I missed Mister - as well as Haley Jane, sadly. (Symptomatic of Blowout)

Ran into Jon and Carl from Blase Splee - who handed me a CD version of a 7" single - two new songs from the fractured-folk pop collective. Keep your eyes and ears peeled - they're at the Atlas Bar tonight.

Then made it to Paychecks to see FAWN. This is Christian (of Copper Thieves) on guitar/bass/vocals; Alicia (of Nice Device) on bass/guitar/vocals and Matt Rickle (of Javelins, on drums) - Indie-pop vocal melodies (see: Kiddo) over muscular and gritty rock-ready guitars (see: Nice Device) and intricate post-punk-ly erratic drums (see: Javelins) Enjoyable... to get blogger-ish on you... "...if the Pixies were more straight-pop??..." anyhow, they made believers outta the Paycheck's crowd. 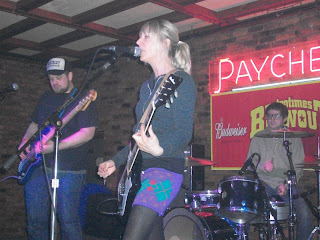 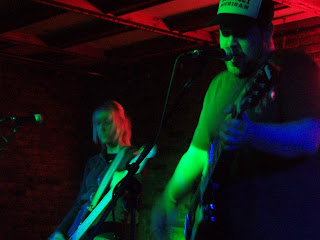 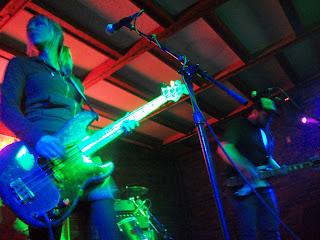 Then we lead into Carjack - a tour de force of zaniness, rough-hewn punk rock, spaced-out-electro synth and danceable beats - instilling a bit of history into his set by quasi-covering "The Big 3 Killed My Baby" as an ode to that formidable single's most earliest live performances, on that same stage 11 years prior, (also, pleasingly, infusing a bit of "Nervous Breakdown" but slipping in "another Blowout" over the verse)... New jams like "Black Licorice" got the crowd going - but so did antics with a full ET head-mask, a new fleet of Robots and a dance-party at the end that featured the just-made-it-for-the-last-song entry of this red-suited freaker - (whose likely performing tonight, with another band, for a Loco Gnosis party). 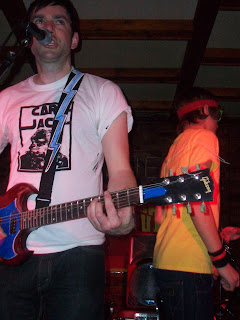 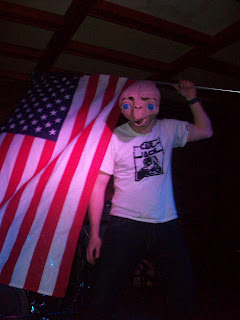 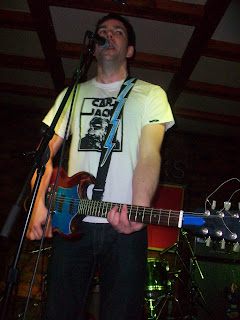 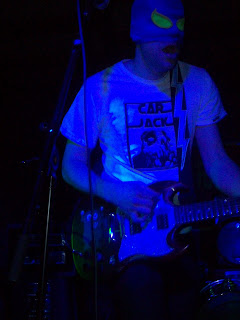 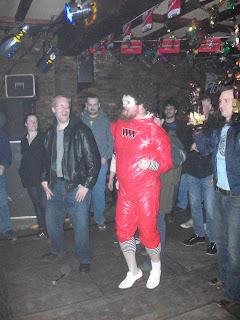 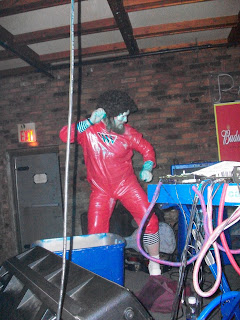 Tried to hoof it over to the Whiskey in the Jar in time for Jesus Chainsaw Massacre - anticipating to be only 15 minutes late - only to find they'd already finished. More info.
Carjack's rip-roaring was followed by one of more invigorating performances of the always-precise and dynamic Zoos of Berlin - really jamming it out at the end with big grins and a flayling, stomping keyboardist, on "Juan Matus" - and debuting new songs like "Movie on August Ray" for their forthcoming follow up to Taxis. (<--which could likely see a vinyl release, soon). 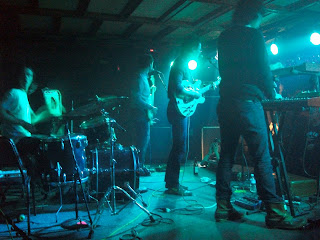 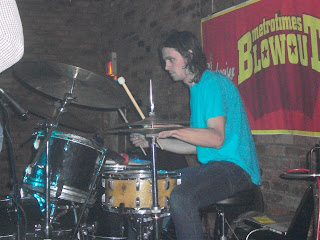 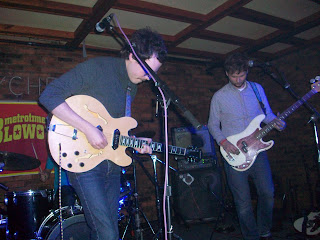