Ted Leo gets back to his roots, less conceptual than the last record, and...not necessarily less apocalyptic than Living with the Living, but more upbeat about it - "If we're living in the last days...well, then maybe there's a few things we oughta' do...!" 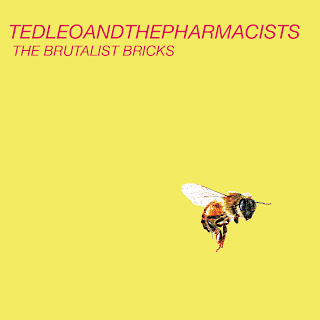 Ted Leo has always been a very conscientious folk singer – the host at the head of a buffet table of varying sensibilities and schools of thought – from a hardcore-punk-spurred youth between New Jersey and DC widening his mind to the unchecked injustices of the ruling class while also feeling tempered by a beyond-his-years wisdom and historical awareness regarding the intricacies of social movements pushing and pulling against corruption – his music and message is altogether rousing (to the nth degree) but he balances in musings on mortality, repartee on apocalyptic proselytizing, legitimate anxieties and acknowledgements of human limitation.

And yes, I said “folk singer.” Certainly not your Newport-set acoustic guitar yowler, with his electric-guitar heavy roar pop/rock; along with his Clash-cut, British-(Gaelic-ish)-punk-angled-shit-kicking hard-shredded rock, pure, profound and swiftly-poured vocals with the aggression of hardcore, teased and spiced with the jangly poppy-flavor and jittery military march drums of British post-punk – he is often regarded as some kind of messenger; words delivered from a vigorous voice and a weary heart sounding as though thine eyes had seen the goriness of the beaten down protesters, of the warmongering politicians and coming back to us with assuring ballads of “feel(ing) the change coming on…I trust we can carry the day…”

Listen: Ted Leo & The Pharmacists - "Even Heroes Have to Die"

He’s carried this through five LPs worth of intricate punk-rock-born pop – jangled and shredded by Gibsons and Epiphones and spilling, pounding, breaking and bursting off the walls with yanking bass grooves and demolition drums. The music itself, for the window-shopping indie-rocker, might fit with Spoon in its relatively sparse guitar-lead grit and grind, only Ted can’t help being blunt and can’t help but cathartically turn it up to 11 for the fast-driving tears, diverting from my posited counterpoints tendencies for the esoteric and the darker, slower grooves. But Ted’s voice, once you hear it you’ll get me, is this high-mid tone that cuts and croons, screeches and coos, rapt by palpable reluctance that, if he has to be the guy, he will, and he’ll sing his heart out best he can, putting in historical references from the ruinous policies of Reagan, to the ugly clash of mid 60’s Civil Rights, to topical takes on fear and greed in politics to personal anecdotes of familial celebrations and heartfelt love songs.

That last one, the love one, was something we hadn’t heard from Ted often, until Brutalist Bricks (Matador), and, quite understandably after twenty years of songwriting in the realms of idealistic-punk-passion, we also hear the toll taken on him by the crusade. On “Ativan Eyes,” warm harmonies cascade down the chorus as Leo belts into his disarming falsetto, “I still want your heart beating on mine,” while also confessing, “…so sick of cynics and I want something to trust in.”

The realist admission, “Even Heroes Have to Die” nicely intertwines the golden acoustic jangle with the crashing wave/surfy-shred of the electric, falling into these hard-yanking hooks of battering drums and Leo’s wavy vocals hurdling over them with infectious “Oh-whoas!” Here we find more of Leo’s characteristic somber-yet-enthusing poetics, “…turn prisons into prisms of the self…”, while, this also becomes a love-leaning ballad, of sharing the simple beauty of the seasons. “No one lives forever, no one’s wise to try…”

“Heroes” and the tightly-wound piano punched “Woke up Near Chelsea” highlight the advances of Leo’s Pharmacists growing to a 4-piece, giving the recordings more texture and counterpoints. “Bottled Up In A Cork” blasts off at an almost awkwardly fast pace at first, but settled into a smooth driving acoustic led shimmy; a recounting of his going to see his newborn nephew dotted with humorous self-deprecation and finely barbed bits like “Me, I’m just a loner in a world full of kids, egos and ids…” or the grinning slap he gives to the powers by referring to them distinctly as “the television congress…” And winds it up, over those lose-yourself-builds of bladed guitar soars and buoyant acoustic guitars, he puts his hand on your shoulder, “…a little goodwill goes a mighty long way.”

If I could sum it up simply – I would say that this feels closest to his earlier work, on 2001’s Tyranny of Distance. Whereas the albums between that landed on a rousing, we-can-do-this, hard-hooked, charming and guitar-glittered pop (Shake The Sheets ) or a more solemn, even angry, grind into reassessments while coming to new understandings of human nature and relationships through more conceptual pieces (Living With The Living) – this record, Brutalist Bricks, attains Tyranny’s don’t-stop-for-nothing-drive, but comes from a voice that’s gotten down and dirty through the dark days of the Bush-era atrocities and now wants to reclaim the down-to-earth charm and hands-in-the-air celebratory rock, surfy-shredding, hard-pounding, mostly-fast and fiery, yet bringing it down for a few slow grooves and sparser lo-fi fuzzy musings.

“I know I been missing but I feel the change…I know I’ve been resistant but I feel the change…” While the whole album isn’t dominated by want to put aside political pushes for the simple sooth of an intimate love, nor is it a harkening back to an almost decades old rouser-rock initially born with the Pharmacists project, it is, as is often the case, a well-where-do-we-go-from-here message delivered over a glorious gush of relentless guitars and steely, shunting rhythms – but when our 21st century style folk singer says he’s tired of cynics, it makes you think, that in this internet age of complacency and apathy, that the future will always be unwritten. And as is characteristic to Leo, that hope, that change, is not blind; this is conscientious folk rock – see the building up-and-down roll and rock of this songs closer, that time is of the essence—that, “if we’re living in the last days, then maybe there’s a few things we ought to do…”