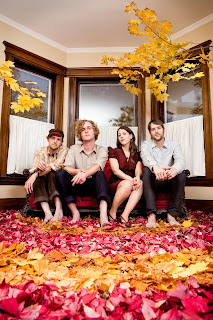 (Ed. - Real cut off the first sentence - so that the intro to the article doesn't quite make sense - so here's the sort-of-'uncut' version – with photo cred: Trever Long—both)

Singer/guitarist Steven McCauley accentuates the exclamation in a subtle sort of once-was-lost-but-now-am-found manner. But that’s not the case: anyone who’s checked out the Detroit quartet’s last two EPs or been able to catch a show could certainly, subjectively at least, qualify the sound: a toe-tappin, jangle-heavy, southern-rock tinged driver; a bit raw, a bit rootsy, a bit raspy and brushed with an urbane twang.

“Before,” McCauley explains, “we never really had a line-up that was established for long enough; we never really got tight. We’ve had three guitar players in three years, and two, no…three bass players, Joe (Lavis) is our third. This is the first time we’ve been able to dedicate a full year together, practicing and playing a lot more, so things come together more, and we have a good rapport with each other.”

McCauley started what would become Scarlet Oaks in the late fall of 06, with twin brother Patrick and drummer/singer Noelle Christine Lothamer. The McCauleys had essentially wrapped up the rock-centric Fifth Period Fever in 06 and enlisted Lothamer’s percussive participation for a handful of somewhat rough, kink-work-out performances through the winter of 07. Patrick would depart the band as they finished up the arduous piecing-together of their initial recordings (2007’s Innocence Isn’t Easy EP) and thus began the year long carousel of rotation shifts before finally solidifying in early 09 with Lavis and guitarist James Anthony. The two arrived in time to contribute to the more-swiftly-laid-down Canadian Dew EP. 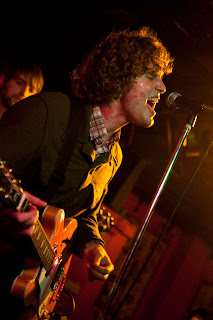 “James is insane on guitar,” McCauley said, “he can play jazz, he can play classical and Joe’s just really solid and smooth on bass.” Lothamer, meanwhile, McCauley’s longest enduring collaborator, has banded around for years, with The Alphabet, Troy Gregory and more, and contributed writings and lead vocals to some of Canadian Dew. McCauley is still primary songwriter, but with Lothamer, he succinctly sums their shared evolution, “…she knows where to go. We’ve all become much better musicians.”

The band is “amped up” as of late: tight, together, flexed, confident and getting airtime on more than two dozen Midwest/east-coast college radio stations. “It’s long overdue,” McCauley said, going back to the rejuvenation of finally feeling settled. “We’re trying to make something of it,” he added, pointing to their upcoming out-of-state tours, his own songwriter-application for a Kresge Arts grant and an, admittedly “weird”-feeling foray into a new online arts-fundraising site called kickstarter.com.

Another indicator that they are, more than ever, at their most solidified, is they’re able to balance tenures in other bands. Most recently, Anthony collaborated with singer/songwriter Jason Croff, while McCauley plays bass with stately-popsters Computer Perfection. For McCauley, that’s a healthy collaboration: not only longtime friends with the group, it fits to his previous “riff-oriented”/synthesizer-friendly music of past projects (FPF for the former and Shuttlecock for the latter).

So what about that sound, that new found sound that the established quartet has been developing? “A little more rockin, I guess,” McCauley shrugs and follows with his characteristic hearty chuckle. “Kind of fuller, at the same time, more precise,” and then, offering, “less jangle, more punch! Obviously, in songwriting, you have a certain style, but trying to defy your own conventions is the most important thing.”

The band is working towards a summer’s recording of a full-length LP. And that, McCauley said, is “up in the air” on various levels; aiming to dress it with nuanced instrumentation and spice it with the recording touches of a handful of unique engineers.

“We have the material, we just need to lay it down.”