Norway-originating psyche/shoegaze collective Serena-Maneesh return five years after its fairly-buzz-laden debut. Inevitable reference points that came tethered to their US debut in the summer of 2006 were typical of its fuzzy-sheen/fractured-noise-pop, like My Bloody Valentine, VU and the Swans. SM 2 is much more cohesive and distinguished... "evolved" if you'll pardon the cliche - five years of development was bound to do that... 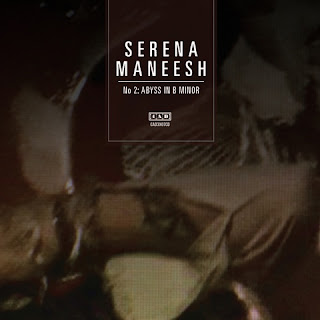 Listen: Serena-Maneesh: "I Just Want To See Your Face"


The opening swirling screeching feedback conjures images of darkened, mossy, dried-blood-splotched basements of spooky castles with a fog-machine-esque spray over the stony floors and half-opened tombs lining the halls...
This Norwegian psyche rock collective knows how to set a mood.
As disparaging as I often am, both of the usage and of the suggestion, of "drug rock," I have to indulge the old stereotypes and lean on the crutch-like power of phrasing it as "head-music;" mostly because if you put your headphones on it has, at least the illusion (hallucination) of transportational powers - there's more wavy textures of moaning synths and strangled and mangled guitar tones than one can keep track of, spilling all over itself and forming a deluge of head-swimming ghostly bellows - all the while, chunks of a song rise to the top, like eavesdropping only fractures of a conversation - parts of vocals wisp in, never solidifying a melody, batches of drum hits come in for a few massaging taps but quickly fall away, and there is a constantly burning bass whirling around the gears and through the pipes of the song...
And that's just the opener, "Ayisha Abyss..." emphasis on the latter half of the title, to properly characterize its wild wander and disarray.
From there, most elements of this cerebral, stratospheric-scraping drugged-out-psychedelia fall away and the group settles in for quite a delicious blend of seminal shoegaze: fast, clattering drums, washed-out reverb, airy female vocals buoyantly coaxing along bubble-gum melodies and strident guitars stiffly roaring and shredding, off into their own world. "I Just Want To See Your Face Again" has a palpably saccharine, playful charm, while "Reprobate" seems to be the cathartic noise-fest where heavy-metal-ready drums slam away along with a pissed-off-sounding guitar, eventually morphing into pre-chorus statements of elegantly-pedal-fuzzed barrel-rolling guitars that wait patiently for the somewhat-overpowered-vocals to chime in... "Melody for Jaana" is an overly-feedback-gurgled downbeat driving-home-song, seemingly understanding and reflective of the worn ear drums any late-night-show-goer may experience if they pop this in on the way back... "Blow Yr Brains in the Morning Rain" is collection's perfect piece of listless melody, relentless rapid-fire drums and warbling guitars - as dizzying as it is captivating - a noisy exploration.
To go all blogger on you, I remember when this band first came out 5-ish years ago, heralded with formittable buzz as some second coming of hard and heavy black-metal-tinged ultra freaked shoegaze thing, but it didn't take on me...initially, or at least entirely - I couldn't spin their self-titled debut from front to back that often - But this seems their most fully realized...their most confident...their most together.
Posted by jeff milo at 4:41 AM