I’ve used myriad words to elucidate the shimmering rip-roar and slide of the Satin Peaches, and while “rock” would certainly fall into word-soups that I or other music journos spew out in diagnosing them, (space-rock, rock-tinged dream-pop, post-rock) the more straight up, clean and less nonsensical: “rock-n-roll” - has yet to be wholly declared – till now, I think. 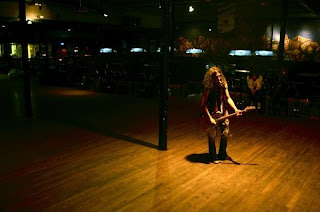 The Detroit-based quartet flirted, back in the veritable sunset-days of the archaic/terminal “music biz” with international stardom and west coast wine and dines through 2006 – and their debut EP accentuated the flavors of the time: art-punk revival, high-in-the-sky-swirling guitars-tones, a mannered, almost listlessly-danceable, dreamy, shiny pop thing – beautiful tones, driving drums and hazy airy vocals. But with the re-addition of founding member Jesse Shepherd Bates on guitar/vocals, the band rolls around in the dirt a bit, scuffing up the sound with JSB’s more guttural chugging guitar flexing under singer/guitarist George Morris’ higher roaring gleam; the rhythm section seems to be physically pushing the band – almost like bassist Aaron Nelson and drummer Jeremy Smith are charging recklessly forward, bent-knees and pointy shoulders, hitting, shaking and shunting the duel-guitarist/singers up against the mics and almost clear out of the room. “Gojira” is the tone setter – tight, pounding drums, swaggering bass and guitars tough n grimacing – it’s a hook-fest, but recalls the blues-tinged psyche of Bates’ (Morris-collaborated) JSB Squad. “No Regrets” reflects the band’s maturity via an epic rounding ballad that burns ever brighter into an all-points-forward, shambled invigoration. “Red” will be the song that justifies the buzz often attached to TSP; Morris’ high wheezy coaxing leads the batch’s best display of intertwining guitars, both following their own bristly, pedal-fuzzed tracts and whizzing up into respective soloing. The sound is less tight-pantsed NY-glistened neo-space-punk and a bit more retro, fractured-pop, rootsy, brawny at points, much more dynamic with its punches.