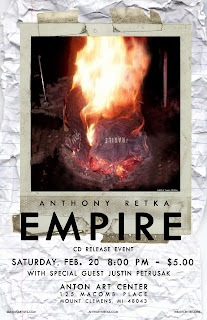 Anthony Retka is known as the rich, autumanl male vocal (and guitarist) of indie-tinged folk pop quartet Tone & Niche. A true singer/songwriter - he never stops writing. Which meant that he'd put out a solo record in 2005 - as well as start up a new band (Mourning Voices) about a year ago.

While MV and T&N have kept him busy, he's finally found some time to collect and release a batch of his own again - thus, Empire is Retka's first true solo record since 05. This is a more personal record for him, first person narratives, ponderous and reflective, blunt and upfront - and stripped to his voice (one of the more poignant vocalists in Detroit) and his guitar.

He'll release the album along with a performance in Mt. Clemens, 2/20, at the Anton Art Center.

Take a listen here
Posted by jeff milo at 11:12 AM