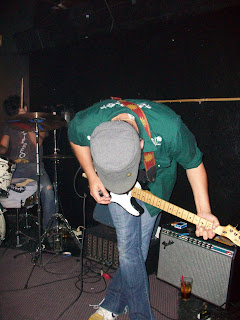 This is what would have run - this week - as "the last print version of Deep Cutz," ...at least for the forseeable future. But, we didn't even get that much - so it runs online - just as all the rest of the rants and local music support, will be - here, online.

With regrettable abruptness, I have to say – thank you all for reading this column – and my thanks to all the bands whose work I covered. We live on – online (deepcutzmusic.blogspot.com). In the meantime, my last show to cover:

The High Strung recorded and released what ended up being my favorite album of the last year – if that’s worth anything to ya – Ode to the Inverse of the Dude was short and sweet, spastic and subtle, a palpably panicky shunt into the curious epiphany of the nuanced maturity gained past the 30-year-mark – captured via energetic indie-rock, sloshing reverb and tumbling drums and dizzying yowly vocals.

Two of its members, singer/guitarist Josh Malerman and bassist Chad Stocker released “solo” albums last month, the lo-fi piano-led Phantom of the Opry from the former and Fripp-fried guitar exploration Honest to Goodness from the latter. A notably strong live group, (with drummer Derek Berk), they play the Majestic Café, 2/19 - w/ Solitary States / and / Bloodbird