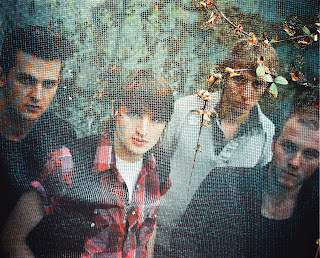 Wild Beasts - Leeds-set quartet turned our heads with their 07 full length Limbo Panto with its ballads of repressed sexuality and bawdy bouts and the creatures that can come out of us in the ether of the night or the freedom granted when the bedroom door closes.

“There’s a lot of angst on the first record,” bassist Tom Fleming admits, “a lot of pent-up frustration. We’re kinda small town boys and we finally got the opportunity to do this record and a lot of this was kind of unleashed all at once, it was a bit too much, maybe, to take on.”

Back to the excited hyperbole – last year, they released Two Dancers, a collection of theatrical, ornately textured, subtly-danceable pop-leaning movements, shimmering as much as shimmying, with a lot of groove but also a lot of atmosphere – it made many realize it was legitimately one of the strongest releases of 09 and soon moved some to conjure suggestions of the second coming of the Smiths, taking in their subtext’s reacting against the stuffiness of society and/or mainstream culture’s masqueraded morality.

“It’s been a surreal year,” Fleming said. “It felt like 10 years.” They finished Two Dancers, toured Europe, made their first visit to the U.S. (at SXSW in Austin), had their album well-received, made a couple music videos and are starting their latest jaunt in Brisbane, Australia.

Their style, musically at least, picks up where the Smiths left off, but also feels well informed by the darkly beautiful aspects of the new-wave movement, spacey, reverberating, intricate rhythms, those burnished guitars and their coaxing hooks (so seemingly molded by the school of Will Sergeant or Jonny Greenwood). Vocally it’s always been another story, another weirder, yowly, exuberant, flamboyant story, as singer Hayden Thorpe distinguished himself (and his band) early on with his falsetto, a blasting pirouette, chalky, wispy, and instigative (or flirtatious) towards the more savage side (or youthful side) of the listener.

“On (Two Dancers), we were more prepared to take risks,” Fleming said. Songs like Two Dancers, it’s heavy vocal delivery of a stark imagery, was “deliberately dramatized. It’s putting the very everyday into a music context, it could be you, it could be someone else. It’s something bigger than you and yet it’s on a small scale. A lot of the songs are about how everything you do has an effect on somebody else whether you mean it to or not, (so) what do you do with that information, how do you live with that and how do you move forward from there? A lot of this record comes back to sexuality and coming into adulthood, trying to make sense of things.”

Indeed. U.S. writers, as attention spread and ears turned, fixate on the sexuality. “There’s only moments on (Two Dancers) where that speaks through,” Fleming said. “A lot of it is quite restrained and pent-up even. I think that does reflect on our upbringing. What’s more powerful, something let absolutely free or something that has to be kept under-wraps. I dunno. That’s open to debate.”

Fleming said they look forward to the tour, but are “sitting on a goldmine” of ideas. “We’ve got lots of stuff happening.”