But, call me bias - I rather enjoyed Tiny Mix Tapes' take...

Some brow-raising selections - by rank and by consideration - and some victories for a few relatively abscures...
I won't ruin it (though if you've read other lists, you can probably guess) as to what makes # 1- but here's # 2's cover - a victory for Animal Collective's Sung Tongs. 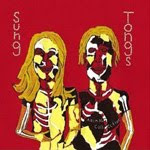 animal collective is terrible, i recently deleted their enitre catalogue from my zune.