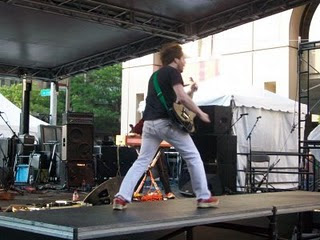 “I remember playing a show at the Magic Stick where I turned around on stage only to be pummeled by a Sean Clancy.”

Christian Doble (pictured below) anecdotally interrupts his own answer to the question of how the band Child Bite changed, from his perspective, since his joining…as February 26th will be his, and original member Zach Norton’s (pictured above)…final show with the band.

“(Clancy) had just taken a backwards leap from the drums. I remember trying getting up only to be side-swiped by someone else’s guitar. My saxophone had been smashed and was unplayable. When I was young, I went to a Kenny G concert and I remember thinking it was cool that he could play a note for such an extended amount of time. Why did I think that was cool?? That’s for dumb people! I would love to see that dude try and play in Child Bite and possibly get smashed.” 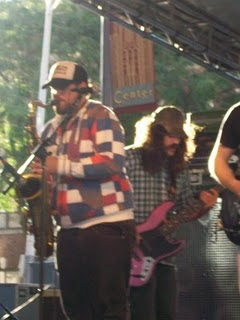 Now, Doble, a longtime acquaintance of founding member Shawn Knight (pictured below), has always played the greaseman type role for Child Bite…I believe the word “auxiliary” was dropped during an interview on the eve of his official “joining” in 2007. So, when I ask him, essentially, to detail the footprint he left, he humbly asks for my own input…

“Well,” I started to ramble out, “I would say that early-early Child Bite, (a three piece with Knight on keyboard/guitar, Norton on bass and Daniel Sperry on drums), could sometimes feel like an epileptic karate chop from a glowing-green-eyed alien who danced like James Brown – but, uh, your entry (and, I would say, along with Sean Clancy), somehow seemed to add a strut to its weirdness – sorta how you’d see this thing in the eyes of naïve KISS fans who were enjoying the combination of horror and heroics – that same energy, only it now had more synchronicity and insanity with the weirdness being ever thus more weird because of you (two), but, with the ever so subtle surge, now, of a slight pop-thing, and…ya know, crazy metal but…(as Doble said), ‘thicker’, that covers it for me, perhaps even more rousing in its weird-pop dynamism.”

“I think healthy doses of both happy and creepy are important to Child Bite,” said singer/guitarist Shawn Knight, adding, charmingly esoteric, that things simply just got more “more-r…” from 08 into 09, as, “the make-up has been an ever-growing/shrinking core with several recurring satellites coming in and out of play.”

“It’s tough to say what I’ll miss most,” said Norton, a longtime collaborator with Sperry; the pair was conscripted by Knight years ago to make noise in a basement. “I really loved being in that band. I think that’s going to be the hardest part – just not being part of it; I’m going to miss all those dudes personally too.”

He got anecdotal himself: “There was a big change when I went from playing bass to guitar. There’s much more responsibility on bass. On guitar, I got to play around more.” (Indeed, a new fire burned in his eyes at those shows – using a wireless signal that allowed him to explore, to great lengths, all venues.) “I could literally drop my guitar, and chase down that 6 ft inflatable Corona bottle, the soundman was trying to get off stage. You know? And in the musical sense, I felt a bit more free to push myself and experiment. So…I bought a wah pedal.” Clancy and Sperry, the rhythm section, (who, Clancy noted previously, really bonded as a beat unit over the shows leading up to 08’s Fantastic Gusts of Blood,) both considered this line-up shift a natural process. Indeed, as Clancy indicates the “insane personal sacrifices one has to make to be in a full band,” thus, forks in the road come up and now Norton and Doble move on to, respectively, a new job (and perhaps new musical collaborations) in Seattle for Norton, and the development of a new band (FAWN) and expansion of a current (Copper Thieves) for Doble.


It’s tough, Clancy noted, “especially when the band, like Child Bite, pushes itself as hard as we do. Mentally, physically and financially, it’s an intense set of choices. And for us it’s a wicked-amicable parting; I love Zach and Christian and what we’ve accomplished with them.”
“Zach and I have been playing music together since high school,” said Sperry, “so we’ve developed our playing together and along the way into something of a ‘brothers’ relationship. Christian, though his relationship with the band has been more on/off, will be missed too. They both are great and unique players.”

“These are two unbelievably talented and mega-creative powerhouse-humans,” Clancy continued, inferring, essentially, that the next move is not to, as the word rings coldly, ‘replace’ them, but rather to just adapt into whatever form fits them best for the road ahead. “Child Bite won’t be the same, not for better or for worse, just different. Just…something else.”
For now, the band will survive as a three piece, embracing a period of loose experimentation to find the right feeling for the future – which includes, for future shows, guitar contributions from Brett Siler (of Stationary Odyssey) and, beyond that, as Sperry sits out a forthcoming tour, they’ll add in drummers Brandon Sczomack (Word Play) and Brandon Moss (Wildcatting/Bars of Gold).
“Soon after (the ‘spring tour’ with Zoos of Berlin, ending April 10), we’ll have the new album out,” said Knight. “…Not sure as of now who will be in the band at that point, so that’s kind of
exciting. –New blood!” 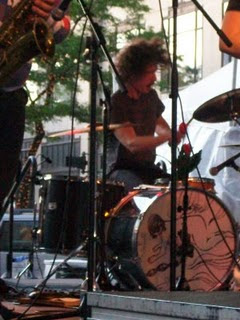 It was a big year for the often fuzzy-faced quintet and their bent-broken-ballet of roar-pop; they embarked on a “beard tour” across the continent and up through the Adirondacks to compete in the World Beard and Mustache tour, “almost hit(ting) a moose,” Norton noted. “And, our introduction into hardcore-beard-culture was great, too. The Beard Team USA Nationals are this June in Oregon, so I’m already growing for that.”
They released a series of 7”s (three, total, with as many different bands: This Moment In Black History/Big Bear/DDMMYYYY—following up with tour-partnerships with each.)
Later in the spring, they’ll release the fruits of recorded labors, including a spat of 12-hour-days spent with engineer J. Robbins, putting together their new LP, The Living Breathing Organ Summer. “I think it feels more mature, yet stranger than Gusts,” said Knight. “I think we each took our individual directions from Gusts and kept going further down our unique paths, which I think is key to it being our most unique record.”
This is their first time recording in Detroit (as they’d dipped lower in the rustbelt into Indiana for past records), first with Robbins for tracking then with Chris Koltay for mixing. “It sounds huge, gnarly and full of manic life,” said Clancy. “We don’t really have concepts for things from the get-go,” he adds when I try to get flowery and ask about themes or processes, etc… “We usually just try to keep it a natural culmination of what happens when us—as distinct individuals—get into a room and try to argue to a common representation of all of us as a unit…which,” he opens up, “is…probably why what we do doesn’t come out as a passive listening experience. It’s the colorful and energetic aftermath of the creative ego-battle we rage against each other for the good (and bad) of this collective-we-dub: Child Bite.”
“(This) was the first time I really filled songs with horn lines,” said Doble. “Originally I was only brought in to record in the studio so I wanted to create parts that didn’t need to be present in the live show.” Doble’s music is at least somewhere on every Child Bite release; before, songs were often brought to Doble in their almost-finished form. He recalls a telling tale of a (06) Gold Thriller recording, while recording his parts “at home” in Detroit, with them in Indiana: “I remember writing a part where I sang and played the sax part in tandem, having been recently inspired by Ennio Morricone.” For “Don’t Do What Your Body Tells You To,” Doble said, “the boys took my parts and mistakenly shifted them into a wrong spot in the song. Everyone ended up liking it better that way. I knew I was in for quite a ride with this band. Child Bite taught me to re-think the meaning of pop music.”
Norton considered it a “terrible terrible shame to leave the band at this time, because I love” the new songs, “…I love the record. Definitely our best work.”
He added, “This was by far the most serious band I’ve ever been in…we were really involved in the decision making process. We argued for months about what to call Fantastic Gusts of Blood.
We finally put it to a vote, which we ended up doing a lot.” (Including, fyi, the naming of the band – which even involved a run-off).
“I guess that’s the glorious thing about the band,” said Norton. “That we found each other when we did and our paths ran parallel for the time that they did.”
Both of the departing biters are driven and dynamic enough that they could lead their own bands – yet they both offered paralleling reverences for de-facto band “leader” Knight, using words like, “a force,” “an almost robotic-determination, a real awe-inspiring work ethic,” and “tough to keep up with…”
Knight, for his part, continues utilizing his skill in graphic design for the band’s benefit – in show posters and album covers. While he’d banded around Detroit through the early 00’s, this was always his baby. Sperry’s rich musical experience includes drumming for experimental orchestral rock trio El Boxeo, with whom he nurtured his bond with Norton, no doubt making this a hard split for the brothers. Clancy came to CB from tenures in other bands as well, most notably experimental indie-rock group Rescue. He will help to fill a big portion of the as-of-yet-untied shoes of future CB. Norton will continue in music out there in Seattle, while Doble develops Copper Thieves, and his latest, the boy-girl harmony (thus, inevitably Kiddo-recalling-aesthetic) of FAWN.
“It’s always weird when a relationship has to come to an end,” laments Knight. “We’ve been doing this for a little while now, so it’s to be expected that over time people’s lives change. No hard feelings, no regrets! I actually started the band with Zach knowing him hardly better than as-an-acquaintance, so the duration of the band was really the beginning of our friendship as well. Zach and Christian both brought their own amazing melodic and structural ideas to the band as well as their lovable personalities.”

And what of Child Bite now?

After the farewell show (2/26 – Magic Stick), they’ll experiment with a new guitarist and dueling drummers – thus will be the only momentarily Sperry-less line up for a tour with Zoos of Berlin, 3/25—4/10. After that…more touring, plus the release of their LP/CD/cassette of forthcoming LP, The Living Breathing Organ Summer, (on Joyful Noise and Forge Again—co-release).

Said-new-album has “some great new collaborators,” noted head-yowler, Knight. “…Members of the Silent Years, The Hard Lessons and Zoos of Berlin, mainly. Also, I think my voice is changing from yelling like-this for so long. It is what it is…”
Posted by jeff milo at 10:08 PM