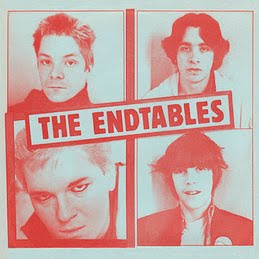 The sound is abrupt and cutting, you burst in and start rolling with a scratchy guitar and burly banging drums – it’s another Drag City-curated long-lost gem/time-warp, feeling here, like the form of a smoke-filled unconventional venue (maybe a VFW hall or cleared out comic shop), dark and smoky and sweaty and beer-soaked, as we rush and slam are way through a fascinating spin of punk from an overlooked pocket of the early-80’s-hardcore era, Louisville KY?, yes, indeed – and here, with The Endtables, we find the 1979 recordings of what might be the closest cousin to veritable hardcore-outcasts-The Minutemen’s unique style of undeniably punk-flavored breakneck tempos, fast and flexed riffs and provoking vocals and singing style, only tempered by a palpable appreciation for traditional rock n roll – (the same sensibilities you’d find from UK’s Wire), but taut and tawdry, with pounding percussion, bendy-bass and sing-speak splats.

The guitars on this record have so much personality – founder/singer Steve Rigot’s Factory-glam-grime persona blended with these wild and wavy guitar roars from Alex Durig lead the way on each track, both elements arm wrestling for the biggest impact – and simultaneously combining to give these songs (the first four released on their own Tuesday records and the next two surfacing as a 7” in ’91), their defining feature of feeling so attuned to the rubbery, rousing, hard-angled punk-ified rock of Minutemen/Wire (“, sticking out from the sometimes overzealous bent of hardcore and yet also set apart from the cuter pop-ified punk of maybe a Buzzcocks or XTC. Find out what you missed.

(You may be able to dig some mp3's here)