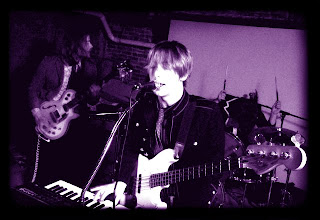 The Ultrasounds (Christopher Smith-bass/vocals, Patrick Conway-guitars, Sara Griffin-drums) started with Smith and Conway fresh out of high school in 03, with this line-up solidified in 06. Since then, they self-recorded/self-released “The Way Things Were,” and recently finished the “Give Up The Fight” EP with Brandon Wiard (Pretty Suite) and then later with Tim Patalan (of Sponge, at The Loft). “2009 was a very emotionally intense year for all of us,” Griffin said, noting that the EP push came from different California-based labels who wanted more, “and the new tunes definitely reflect that.”

Current magazines readers awarded/praised them as “most underrated” band in 08 – and they’ve since grown considerably from earlier perceptions of a Kinks-ian 60’s psyche pop-negotiating-a-Strokes-ian-art-punk revival. “This record is a bit darker,” noted Conway, “the songs are denser and more intricate than before. Chris’ piano has a more prominent role, Sara has stepped forward to sing on almost half the tracks and her harmonies are present throughout.” Griffin said their friendships’ duration and closeness shines through in writing/recording/performing, they’ve gotten more meticulous at sound-sculpting/perfecting and used live performance as a means for a song’s evolution. Conway said he’s gained adaptability through playing in numerous nuanced line ups – and that together they’ve learned to be wary of how to measure their respective intensities for optimum sonic results. Sensibilities are shining through on the new writing: be it an electronic vibe from Griffin, or a jazz influence from Smith or more echoing/fuzzed-out guitars from Conway. “Recently,” Smith said, “these things have been melding to form a unified sound.” 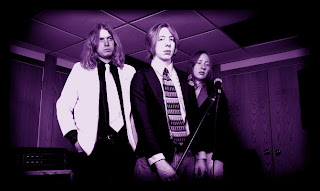 DC: So what can you say about the latest EP? How have you changed since the last album, songwriting-wise or other…? How would you say your sensibilities, overall style/vibe has changed?

Pat: This record is a bit darker than previous release, and deals with more mature themes. The songs are dense and more intricate than before. Chris' piano has had a more prominent role both in the songwriting and the recording. Sara has also stepped forward to sing on almost half of the tracks, and her harmonies are present throughout.

Chris: One of the things we've tried to do is shift our sound to something that more appropriately accommodates the addition of Sara's vocals. I think adding the keyboards helped give us the musical 'tools' so to speak to accomplish that...it helped bring a more unified sound to our music. Also, personally I feel like we've done a better job of stretching out thematically, in terms of the colors in the music and the lyrics as well. For me songwriting hasn't changed much, we have this process where everyone writes and sometimes you come to rehearsal with a complete tune, other times you bring some ideas and we all collaboratively flesh out the details. The whole thing varies from person to person, but typically I do the former.

Sara: We have all been close friends outside of music for a while. In the past year we have been concentrating a lot more on bringing that togetherness to our music and our live performance. We have calmed down a lot and spent significantly more time perfecting songs. Rather than quickly writing a tune and moving onto the next song, we revisit our music over and over until it feels right. Even some of the songs on our new album have evolved in our concerts. Personally, I like that. It brings a new element to the live show that makes you want to come back for more, rather than being content lying in your bed listening to the album. We are working to make both experiences equally satisfying in their own way. Each of us are more committed to our music than we have ever been and I don't see any end in sight.

Pat: Over the course of The Ultrasounds, our line up has changed several times. As a guitar player I've gone from being one of two guitar players, to the only guitar player, to a guitar player accompanied by piano. Each one of these set ups affect the way I fit into the band and what the band can do as a whole. I write collaboratively with both Chris and Sara, and if you know us well you can hear which songs are which. A lot of the ones with a more prominent guitar hook are written with me, and the more piano driven songs are written by Chris, obviously. We spend a lot of effort trying to take up as much space in the music as we can. We've played with bands that have 5 or 6 people and they don't sound nearly as big as we do. I think that comes from learning to be economical in how you play music. With only three people we constantly have to make decisions about which part is more important to play, because when I play a lead on the guitar, we lose all the rhythmic things the guitar can do, and when I'm playing a rhythmic part, Chris has to do more melodically on either the bass or the keyboard. Limitations like those make us work harder when we're writing songs, and I think benefits us greatly.


DC: Can you talk about expanding beyond the more indie-rock/pop thing of the past, and into the more textural…atmospheric, what-have-you…

Pat: Our sound has changed a bit from the previous record. Expect more vocal harmonies, more echo and fuzzed out guitars, more intricate songs and more polished production. The music is more dramatic and the message is more genuine. There are songs that are densely produced and there are songs that are stripped down. After working on and struggling with it for almost a year, I can finally say with confidence that people are going to like it.

Chris: One thing I've been noticing lately is this clash of influences in our music that's been finally culminating in the creation of this new sound. The breakdown you're referring to with the 'speaker-boxed' vocals and all the delay and effects is kind of indicative of this electronic vibe that Sara has been heavily influenced by, so naturally it's a sort of theme that dominates her tunes. In my tunes, you can hear more clearly the jazz influence in the way I voice the changes, the tine piano parts, that sort of thing. Then, at the same time Pat has these sort of blues/riff-y/guitar rock influences, that identify the parts he writes. Now, in the past this sort of thing resulted in us just having different tunes that were each different styles, but recently these things have kind of been melding to form a more unified sound, and that shows through in the new recordings I think.

Sara: One other thing that has changed with our new music is our focus on not only what is, but what isn't. In the past we might have been reluctant to have silence or minimal parts in our songs. It is a bit more scary. It makes you feel a little bit more vulnerable during those parts. When there are a bunch of things going on at once, it is harder to notice mess-ups. But since we have grown as musicians, we have been getting more confident with ourselves. That has opened up a whole new side to our music. We're trying things we've never dared to try before. In the new record there is much more sound outside of driving melodies and rhythm parts. And as you describe it, much more texture. It's not something you always notice right away, but I feel like it brings the music to a new level. You can experience it in different ways based on how you are feeling when you listen to it.
~


The band will shop around the new recordings when it’s closer to officially coming out – find more info at their site – or just go see em at their shows and ask them afterwards.

“Give Up The Fight” EP is on the way…