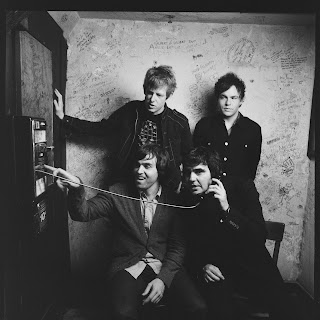 (find an mp3 at stereogum)


A Spoon review can be boring.

I mean, with all the myriad musings we can spin out upon a newly released record, it becomes difficult when there are no vines upon which to swing, no specific nerves to pluck, no angles to adjust our aim – when, we are essentially reviewing the musical equivalent of “comfort food,” –familiar spices and delectable kicks. When the musicians themselves are not drugged-burn-outs or overzealous art-farts or confrontationally post-modernist-wannabes, when the music is not polarizing either in its overly-produced shininess or perhaps derivative, leading to fickle hipster camps varying decrees between they’re-too-“this” or they’re-too-“that,” when, from album to album, there are no drastic changes in sound or style, no overly conceptual indulgence, no risk of alienation – a clean driving record through and through, never written up for tickets by the sell-out-police when they’re songs were in commercials or theme songs, never burning bridges back to “oldest fans” or “biggest fans” through any rash sonic transformations.

A band’s band. A critic’s band. Spoon is as solid and steady now as they’ve ever been – it’s just that, whatever you want to pin it on, mostly likely the internet – their fan base has significantly widened – thus that they are now equally the darlings of abstruse hipster record-collector pockets as well as the glossier Borders and Best Buy mega-shelves. But it still seems to work and it still seems, as I vainly try to avoid boring you, that I can’t help falling back to the same sturdy and reliable adjectives I’ve used while listening to their past records, from 02’s Girls Can Tell to 08’s Ga Ga Ga Ga Ga: gaunt, aerodynamic, tough, jangly, strutting, spacious and punchy, subtle yet powerful…etc etc – it still holds for Transference (Merge).

The one new narrative vine we can swing on is that this is their first, as a band, wholly self-produced record – the fruits of which are perhaps best highlighted on the hazy-bursting riffs of the echoing guitars of latest single “The Mystery Zone,” a teasing, lightly danceable groove with each instrument inconspicuously chopping along like falling puzzle pieces with singer Britt Daniels’ occasional falsetto flares giving an almost new-wavey feel – but the kicker is when those strings roar in, feeling declarative by comparison to the starved guitars. This flows right into the hovering, swirling synths of the trip-hop flavored “Who Makes Your Money,” and, while those preceding words may seem foreign to Spoon, bare in mind “Money” still maintains that characteristic bass groove with Daniel’s raspy prod (only now, dressed with dizzying multitrack vocals echoing, fluttery and ghostly) as more wheezing synths and samples spill over each other as the song sort of disintegrates….

…and kicks into one of their catchiest yet thus even challenging past lovelies like “Way We Get By” or “Turn My Camera On,” this new one-two-stomp of piano punching pulls being “Written in Reverse,” the keys sound attuned to a dusty old thing in the corner of a bar, with the bass now a growling fuzz and the guitars more fiery – its commendable that for much of it, these three lead instruments are actually splaying all around in a bluesy freewheeling jam, while the strength and tightness of the drums sufficiently serves as the main hook. There’s fresh character (that tell their penchants as producers) in the AM-radio-sunbaked guitars of “Trouble Comes Running,” or the rich melancholy clang of piano-dominant lullaby “Goodnight Laura.”

But, -end-o'-the-day-- you know why you like Spoon – I don’t have to put it into words, and simply put – you’ll find it here. By distinction, if Kill The Moonlight helped establish their stripped down punk-folk flavor with its lo-fi-jangle and Gimme Fiction was more theatrical/bluesy/dynamic with their most pop-iest fare, and Ga(x5) had more of a darker, ethereal thing, this can be appreciated for its earnestness – the instruments are often all up front, its exemplary of their characteristic sparse dressing – not so hooky, but still rough and rocky – its their continued voices, their maintained tones. It’s what you want. It’s comfort. What else to do but to shrug like the boy on the cover – hopefully not in boredom, but satisfied surrender. 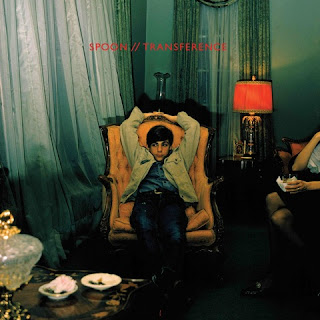