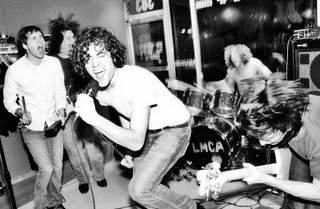 Lee Marvin Computer Arm - a Detroit based soul-rock freak orchestra - aptly/casually described by its bassist, Zachary Weedon: "...a group where everything's turned up to '11' and it's fucking loud and it's just a barrage; it's a fucking car engine at 120 mph..."
They recorded a new single and want you to hear/get/experience - the recording! The song was done a few months back at High Bias (known laboratory of Chris Koltay) - and produced by Danny Kroha. It "comes out" 2/20 - via Detroit's Italy Records.
From the LMCA-news desk: They'll be working on a full length in about a month, with Steve Albini.
"We think this is our best record," Weedon said of the new stuff, "from recording--all the way down to the art--Jamie Easter did the cover. The recording was all done live, including vocals, just like our last single, but we didn't rush it."
Druid Perfume and Gardens open things up at the show at the Loving Touch in Ferndale.

One of their new songs can be heard at thier myspace.
Photo: Esme McClear
Posted by jeff milo at 9:54 PM