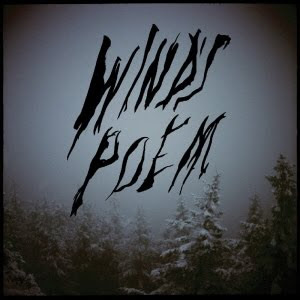 For info on Wind's Dark Poem and more - click here.

A soul-shuttering thunderstorm seems to rage over the song – as though the singer (sung here by the ever edging upon tears and ready to howl frailty mixed with a world-weary equability from a man who sounds like he’s seen the monsters) were enclosed in a humble, unstable shelter, a shack or a tent or a leaf-lain ditch while the rattling roar of the majestic and frightening wind (represented here by a masterfully manipulated feedback) crashes in and down and swirls around the soundscape in a manner confusing; you to question whether the wailing gale/feedback of the upset earth is charging up in support with Gaea’s gratitude or with intent to bring the song’s shelter down and stop it from being sung. 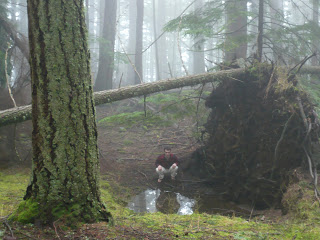 Thus, we get through track one of Wind's Dark Poem, one of the most monumentally-missed records of my personal repertoire of 2009, by revered atmospheric fuzz-curtained songwriter, Phil Elvrum, of (Microphones)/Mount Eerie. DC is 8 months late to writing about this album, which is sacrilege - not only in the so-instant-we-haven’t-even-finished-reading-this-sentence-world of blogs, - but also in the ravenously devoted (and enamored) fan base that follows this experimental song-sculptor from Anacortes, WA.

Elvrum (alternately Elverum, with his own label) is one of those talents that feels intimidating to write about – his lyrics are abstruse, sparse and devastating – the words (as well as the voice singing them) feel whittled by the rough unforgiving hand of the wilderness, the same wilderness he overtly references directly via interviews or indirectly via the showing influences upon his photography, poetry and illustration as, indeed, providing him inspiration: They (the songs, the works) are achingly austere, nocturnal, restless; with vivid imagery flashing through like blinking eyes on a night’s traipse through the deep dark wild woods over pallid rocks with swaying gnarled branches above, tree’s arms snaking through the moonlight…

You see what effect it has even on me? I splattered that out just from listening to the 11-minute haunted lullabye "Through The Trees."

Like downing some elixir and losing myself into some soul-dilating tumble of ecstatic appreciation for the pain and the dark and the freedom of the night – the night and nature and trees and mountains – all prominent elements, powerfully depicted, throughout the scuffed (“lo-fi”) cannon of Elvrum, from the Microphones onward, and celebrated in a sweeping summary (tinged, on this record, by/with a hard but nuanced-lean into the harsh roars of black metal, tempered through his characteristic elegiac folk and coaxing electronic textures of subtle synth howls and occasional guitar flickers).

This was an album I’d initially interpreted as the man heading out to the woods (for another of his likely many deep-inhaled hikes of pine and dirt and brisk mountain slope chills) with notebook in hand, to just stand and be massaged, beaten, hardened and consoled by the always underestimated/underappreciated power of the wind – …which, I should stop there before I, in my own inadequate ability…lean towards some “dust in the wind” cliché…but Elvrum, himself sums it up, over a groaning sonorous cymbal scrape and a throbbing synth reverberation on “Summons…” “…I can’t say it, so I’ll let the wind…come wind, destroyer of worlds…show me shapes in the swirling dust…sayer of names...make me listen into the night.”

Another way I, initially, interpreted Wind's…was an exploring of the ominous implications of those seemingly innocuous cut scenes on Twin Peaks showing 10 to 15 seconds of hemlocks swaying in an ever-building gust. “What goes on up there in the night in that dark blurry place,” he asks over the most palatably indie-rock leaning (Twin-Peaks-soundtrack-sampling) xylophone dashed ode, “Between Two Mysteries.”

To come to Mount Eerie, and Elvrum and Microphones through this record, makes me give it a power that longtime fans will only-helpfully downplay and assure that there rests this similar power in much of his work, exceedingly-so, perhaps. It leads to grandiose table-top fist pounds beside my lap top that Elvrum is perhaps an artist who should transcend the eye-rolling cliché of “like no other” and actually, earnestly, have it rightfully cast upon him – because he is taking traditional structures and shattering them into stringy pieces thus that he can expand them throughout larger, weirder, louder realms to where they feel still linked together – the similar chaotic beauty and bewitching bewilderment set on by the deepest tree-tunneled states of our dreams.

“...was it a dream where I wandered off the trail…aimlessly drawn…” (-Ancient Questions)

P.S. on a personal note – I love the fact that this album sounds infinitely, incontestably better – between headphones – car stereos will not do it justice. Get close, press it to your head (your heart) close your eyes…transcend.