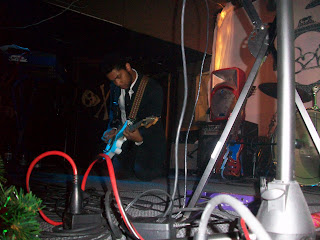 “A lot of it just happened as it was going on tape,” said the man alternately known as “Justin Audio,” speaking of his (and uniquely, now by extension, his band’s) debut full-length cassette, Way of the World, a batch of 17 fuzzy, cloudy, inside-out-pop ballads scratched together with the cheapest 4-track available and vocals roared and refracted through a guitar-pedal. These songs, smooth cool love songs, to swaying campfire-ready folk songs to edge of the stage head-banged punk to space-rock, though recorded in the dark aesthetic of scruffy psychedelia provided by his (and roommate/future-band-mate, Jamie Burnstein’s) basement set up, would wind up being the fuel for an inevitable live debut two years ago to the week, appropriately helping to close out revered local LP layout Record Time. 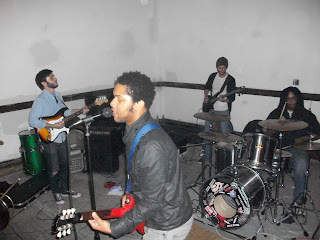 “It was my first time ever playing where it was just me,” said Walker, who hadn’t yet gone solo, despite being a hired-gun type utilities man for many other local bands, including current membership with Electric Fire Babies and Isles of E.S.P., but also as guitarist for Jamie Burnstein’s ambient/ameicana act Quiet Americans and, most notably, the all-too-brief flicker of local sensations, classic garage/soul rockers Siddhartha (with Jackson, from 04-07). “Well,” he recalls preparing the Record Time set with his platter of amorphous swooshing space-noise-rips, “how the hell can I play these songs live?’ At that point I was thinking that, these songs are gonna be…if there’s any element that is the essence of the song, then that’s what’s gonna be played. ‘Cuz it was just guitar and voice for the most part (on record), it ended up being me and my guitar and playing a bass drum with my foot.”

It was a band before it was a band, but even before it was just his solo songwriting. He had kicked around the idea and jammed a bit with fellow avant-artisan Elizabeth Sherwood, and jumped on the name when he saw it written across a tascam recorder. The very first songs had Walker’s hopes of eventually being interpreted by Siddhartha – but when the Detroit line up disbanded, he was free to get as weird as he wanted…a project all his own.

“Justin likes to be weird,” Jackson, nailing it again with characteristic succinctness. “I mean,” then a chuckle looking over at his longtime friend, “Justin is weird.”

“From when I was a kid,” said Walker, an east-sider who after high school traipsed the campus of Wayne County Community College with his guitar case on his back, putting-out and answering-to various calls for forming bands. The day-jobbing lifeguard learned the six-string in classic heartening manner, formed by punk rock record collecting. 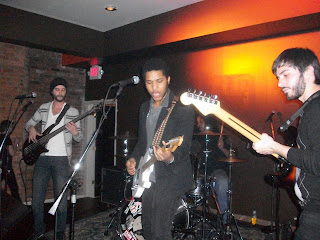 “I think Justin never got a chance to play anything weird,” surmised Jackson. “He plays with all these different people; I can take it back to Siddhartha, where, it’s not like we didn’t’ play how we wanted to play, but we were expected to play a certain way.”

“The way Siddhartha sounded was totally how I felt a band that I would have liked to play in at that time should sound. The first punk record I got was The Clash London Calling, which doesn’t sound like a punk rock record; it’s every other musical form on that record except-for-punk, but...with a punk attitude. Well, Siddhartha had this sort of attitude, we have a tendency to play like ‘this’ with ‘this’ sort of emotion going into it, but, it shouldn’t be limited…”

“I just always felt like whatever project I’m involved with is like, it’s only a matter of time before it progresses and grows to a different sound, somewhat…but, the attitude, essentially, is still DIY- but, not punk, just, being unique…being original.”

Hi-Speed Dubbing, still in its formative stages and, perhaps now, experiencing its most formative period to date, with bassist Burnstein and latest-joiner, guitarist Derek Szubeczak, will initially be a band that sounds nothing like the record – for the simple fact that “all these sounds in my head” (as Walker puts it) are now given legs to stand on and more coordination with a full (human) rhythm section.

“Justin can’t be up there playing six instruments,” said Burnstein, who said he was interested in the project from the get-go, coming home from work and hearing the beautiful and haunting spaced-out guitar roars emanating from his roommate in the basement. Burnstein even added some drums to the recording, on the fly – as was the spirit of early HSD.

After the Record Time show, Walker enlisted Jackson and guitarist Eric Dilworth (of Isles of ESP) to interpret a song-less, structure-less set of three ten-minute pieces…or three separate noise-furled experimentations. Dilworth would jam a bit more, but eventually move on, whereas Jackson stayed. The pair, who had played briefly with fellow-former-Siddhartha-guitarist Ayinde Zuri in The Directions, wound up meeting up and playing together often, solidifying their bond.

Burnstein, meanwhile, has known Walker the longest of the four, as they met up through a band-want-ad and jammed back in 03. They’re living proximity served for musical brainstorming, both instrumentally and conversationally.

“Justin and I like all the same music,” said Burnstein, “just…”

“I grew up basically listening to a lot of Dylan, Leonard Cohen, and classic rock,” said Burnstein, who also played with The Horse Rifle. The Quiet Americans experimented with ambient music, “which,” says Burnstein, “is what I’ve been obsessed with over the last three years. But, I like Justin’s material, I think it’s really Detroit—in a lot of ways. I think it’s a good representation of what a lot of bands are doing.”

In his travels, Walker wound up playing with another former-Siddhartha-ite, Brandon Weiner, in said-multi-instrumentalists’ The Clapp – a band that tried out Szubeczak and thus, got the two to meet briefly. HSD’s current guitar-duo would meet again, later, for try-outs in the Cyril Lords.

Anyhow, as Burnstein had joined HSD in early 09, the trio came to play a show at the Atlas bar, where Szubeczak was in the audience. After the set, they met up, chatted and…

And then it happened.

Szubeczak is a film major at Wayne and a damn fine guitar player, dude can shred, and he’s got the pedals to push it – but HSD utilizes him as a secret weapon as this is his first real band post-high school. Growing up, he’d dabble in everything, he’d write a rock song—show his friends, then next week he’d write a techno song—show his friends, then a folk song – then his friends would prod him to stick with one sound…

“Why limit yourself to one sound?” Walker affirms, going back to the dizzying schizoid layout of the first cassette. “The fidelity of the recording is one thing, but the elements of the musical sound or what you put into it…why not just try whatever?”

“The doors are open for us to sound differently,” Walker concludes. “People like an aesthetic,…our overall aesthetic…”

“I just feel like,” Szubeczak comes in, offering, “…raw, raw is the sound you wanna go with.”

WAY OF THE WORLD will be released 2/12 at The Berkley Front with cassette, CD and MP3 formats.
After that you can pick it up at the Loco Gnosis store:
http:/locognosis.com/store/display_album.php?id=134
Check Justin and his doings out here as well:
http://locognosis.com/hsd.php
Loco Gnosis is happy to be curating Justin's archive collectively known as HIGH SPEED DUBBING while he works up his live set with his current band Hi Speed Dubbing.. watch for music coming from these guys on local label this year..